February is a curious month. By now, in the northern hemisphere, it’s been winter for a long time. And in mid-February love and death sit side by side in the calendar. On February 14th it’s Valentine’s Day. On the 15th, it’s the day of the Buddha’s death, Parinirvana, or the final Passing Beyond of the Buddha.

Every year I notice this strange pairing-up. Love Day; Death Day. And the latter is a minority event. Not even every Buddhist celebrates the festival of the Buddha’s last day, his passing beyond life. It’s a festival that’s full of stories and there’s a tender account of the Buddha dying: an old man of 80-something, he knew he was at the end of this life. So he told his people that his time was short, and lay down on the ground in a place he’d specially chosen. He lay down on his side, between two tall and beautiful trees, happy to be in the open air, having lived a mostly outdoor life.

A lot of the meaning in this festival is hard to understand, but the central image is simple. An elderly man lies down. He feels his life-force ebbing away. For him, the tide is slipping out for the very last time, down a long, sloping shoreline. We don’t know where the end is, until the last breath goes out, and then – no more breathing in. We’ve all known something similar, or known someone who’s known it. Not the death of an enlightened spiritual leader, but certainly the death of an elder. If we weren’t present right at the end, then maybe we were there a few hours after such a death. Or we’ve know someone who was.

And it’s funny how this day of letting out, letting go of the last out-breath of the Buddha happens the very next day after all the red hearts, the roses and romance. I like this coincidence, although it’s challenging. Whether you love, loathe or can’t be bothered with Valentines Day, the very next thing is death. We CAN avoid romance if we choose to, but not dying. In the end, dying will become our own personal business.

Today I found myself remembering the night my Grandfather died. I was nine years old and I travelled through the night with my mum to see if we could get there, to his hospital ward, on time. It was a 12 hour journey, and normally we’d go by car and ferry. On this night we flew. I remember an episode of ‘The Professionals’ on a TV screen in the airport as I sat on a row of vinyl seats. I remember this tense, focused, directed plan – intense and yet somehow spacious. It was a long, long trip. We were travelling in the dark and we couldn’t force the flight and rail connections to carry us any faster.

The taxi in Dublin, the terse voice of the driver, asking questions just to fill the incipient silence. Heuston Station after-hours, all the passengers gone home. Eerie. We sat in the Station Master’s office with it’s small cast-iron fireplace in the corner; a small curving arched-shape over coals. His wooden desk and electric kettle, dirty mugs high up on a filing cabinet. It was sometime after 1am; the wee small hours. My mother speaking on his heavy telephone to the hospital, or my family – I don’t know… I only heard one-way. Daddy, she called him. He’d died somewhere along our journey. And there was the wooden desk, and the tea. And that station master’s reverent quiet as she talked. Earlier he’d had timetables and charts. Now he was listening, quite still.

In the hospital, some hours later, we stood beside him; a man in his 80s, lying out upon a bench. His face was colder now than I’d known it, and his eyes were resting shut. There was a paleness and strangeness to his skin. Lying on his back; this was Grandpa. So familiar to me and so completely changed. I hardly remember my mum at this point, but I remember her saying “Daddy” which was a comfort in that oddity, a gentle anchor for me as the tide of his being passed far out beyond my view.

That was forty years ago, those fragments. They’re not the same as the death of the Buddha, although every death has a sameness about it. There’s a shock when it becomes true, no longer just a thought we’d had. And for me personally, if I think I’ve understood a death, I’ve probably just skated its surface. It’s not easy to understand love. It’s not easy to know death. But they sit beside each other, like in the calendar of February. And sometimes I notice them, and mostly I do not.

When the phone rang and a voice said, “Hello, it’s Carole from the Co-op here,” I was momentarily confused. Why was the Co-op Supermarket phoning me? Of course it was the Co-op Funeral Directors, but somehow I was still taken aback, and had briefly forgotten I’d said that I would come and pick up Rosemary’s ashes. But I had: I’d agreed that I’d collect Rosemary’s ashes and take them to the place in the Highlands where she’d asked for them to be scattered. When I was planning her funeral, this was one of the details that had Rosemary’s family worried. They were literally hundreds of miles away from the spot that she’d chosen for her ashes, whereas it was only a short drive for me to get there. So when I said I’d take care of her ashes, the relief in Rosemary’s sister’s voice was obvious.

On the way to the Funeral Directors it struck me – in a few minutes I’m going to be carrying Rosemary’s cremated remains in my rucksack. Just walking down the road like any other day. But very soon I’ll be carrying the dead weight of her, her last physical remnants. This is not just any ordinary day. Death is catching up with me again, interrupting my habitual estrangement from it’s touch. It felt like a moment of rawness. And I carried on walking. And then soon, I was heading home, with a heavy load on my back.

I was surprised by how the ashes were presented to me. I’d seen those brown plastic urns with the screw top. Kind of ugly. This was a waxed cardboard bag, like an expensive gift bag, with rope handles. A tasteful burgundy purple colour. It looked like I’d been spending money in a department store. And inside the bag, a cardboard box in the same colour with a white paper inner sleeve. And inside, the surprisingly white-coloured gritty remains, the ashes. No plastic – just good quality biodegradable material. What the hell was I going to do with it?

At home I placed the bag on the kitchen table, made coffee and started playing Beethoven’s 5th Piano Concerto. Rosemary (or her ashes) and I had a date, with coffee and biscuits, and listened to some music she would have loved. This felt like the right way to make a place for her ashes, give them a temporary home. And it was a bit crazy – having coffee with a box of cremated remains. I was confident though that she’s have liked all of it and felt welcomed.

Then months later, one cold September morning, I met Jonny at 6.30am. I, again, had coffee and Jonny had tea which we drank in silence at the table. Then as the sun was rising, we went outside, through the gate and down to the lochside with the box of ash. A heavy mist was hanging in the air, and the dark forms of the trees were only just visible. Jonny took the box of ash, and proceeding in silence, began to slowly scatter them among the roots of the trees beside the loch. He did half, and I did half. Then when the box was empty we stood facing the water – seeing no loch at all as the mist was so thick and all-pervading. And then we broke the silence. We softly chanted into the white air – a mantra that Rosemary particularly cherished. Softly, slowly, three times. Then silence. It all took no more than 15 minutes.

This was a gift she’d given me. The chance to know that you don’t know. And thereby, let the truth in. Thank you Rosemary. I will try to remember. 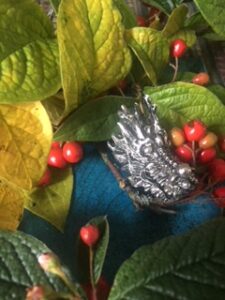